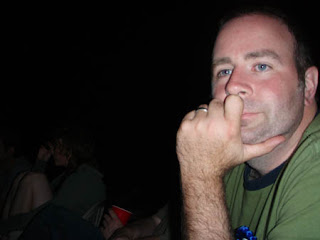 As most of you know (and were in on), Gilday’s surprise party was Saturday. The party itself was a blast, complete with bonfire and a keg of Keegan Ale’s Old Capitol. And I was victorious in surprising him!

Silly me though, I forgot how stressful planning something like that can be, and doubly when you’re doing it at your own house. I found out that you need to have several games plans, because plan A could crumble at a moments notice, plan B will somehow manage to get tossed out the window, plan C will bursts into flames, and the Fall-Back plan doesn’t exist. At one point, when plan C burst before my eyes and all I could do was just watch the flames. Once the fire subsided, I had to reschedule, rethink, and move on.

But, it was all worth it. The happily disoriented Gilday was very surprised, and I got the biggest hug & kiss. At the end of the day when I know I caused this guy to look like the photo above, really are all the prop’s I need.